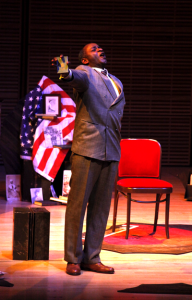 On Civic Duty, with Song

In May and we honor those who serve, first with May Day/ International Workers Day, then with Memorial Day. May also marks the birthday of social activist folk singer-songwriter Pete Seeger (1919-2014) who in solidarity with workers and peace activists sang the honored union song Joe Hill also made popular by socially-conscious artists whose long list includes Bruce Springsteen, Joan Baez, Woody Guthrie and Paul Robeson.

Alive as you or me 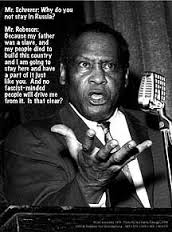 The song features in the award-winning play Call Mr. Robeson. A Life, With Songs in which 20th century football all-star, lawyer, actor, singer and civil rights activist Paul Robeson’s fighting spirit comes alive through British Nigerian Tayo Aluko, who seems to channel it naturally. From Australia to Wales, New York to Vancouver, Mr. Aluko shows support for local unions and social justice, sometimes marching, singing, performing, writing, and always, like his alter ego in his Robeson show, on behalf of people oppressed. Last summer Mr. Aluko traveled by bus from Vancouver to Salt Lake City to commemorate the 100th anniversary of the execution of Joe Hill, the Swedish-American labor activist songwriter famously honored in the song.

To protest the harsh conditions of working people, especially immigrants, Hill wrote songs, encouraged laborers to demand rights, and joined the radical Industrial Workers of the World (IWW), or “Wobblies.” In what might be considered a mistrial today, Hill was accused of murdering John G. Morrison and son Arling in their grocery store, a crime the victim’s descendants say is true while most others believe Hill wrongfully accused. Hill’s memory was celebrated in SugarHouse Park, the former prison site where he was executed by firing squad in 1914. The all-day program of music and speakers culminated with Judy Collins singing the song that’s become the symbol of labor organizing along with Hill’s oft repeated mis-quote, “Don’t mourn, Organize!” from a letter Hill wrote, “I die like a true blue rebel. Don’t waste any time mourning. Organize!”

Something else of significance happened in Salt Lake City that weekend. Descendants of labor legend Hill for the first time met descendants of the men Hill allegedly murdered. Hill’s relatives came from Sweden for the commemoration in which one of them, Lovisa Samuelsson, sang. According to the Salt Lake Tribune, “Merlin Morrison has long resented the fame of Joe Hill, the renowned labor songwriter executed in Salt Lake City for his grandfather’s death. But Friday night, he beamed as he clasped the hand of Rolf Hagglund (Hill’s family name) in an extraordinary meeting between the two families linked by history. “It’s amazing that we’re here and we all understand,” he said. “There is no animosity. We all wish that what happened didn’t happen, but it did, and it’s in the past.” Hagglund, 64, and sister Pia Samuelsson, 58, grandchildren of Hill’s older brother Efraim Hagglund, believe their granduncle Hill was wrongly convicted and executed but said they felt sympathy for the Morrison family’s suffering. “I see only victims,” Samuelsson said.” 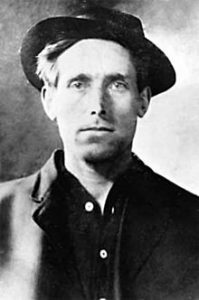 In his day Hill traveled widely singing songs, making speeches and organizing workers under the IWW banner, which also was influential in Butte, Montana, where miners had sought to organize throughout the West under the Western Federation of Miners (WFM). Under the Wobblies there were a number of clashes between laborers, labor organizers and The Anaconda Company, including the 1917 lynching of IWW board officer Frank Little. In 1920, company mine guards gunned down strikers in the Anaconda Road Massacre. Seventeen were shot in the back as they tried to flee, one man died.

The year of Hill’s execution also witnessed Colorado’s 1914 Ludlow Massacre later described by historian Howard Zinn as, “the culminating act of perhaps the most violent struggle between corporate power and laboring men in American history.” The massacre was an attack on a tent colony of 1,200 striking coal miners and their families by the Colorado National Guard and Colorado Fuel & Iron Company camp guards when some two dozen people including women and children were killed. The outcry called for an investigation by the House Committee on Mines and Mining whose report, published 1915, was influential in promoting child labor laws and an eight-hour workday.

Today you’ll find a marker at the Ludlow site, 19km NW of Trinidad, Colorado, a ghost town.  But the spirit of Joe Hill, like Pete Seeger, Paul Robeson and the other men and women who have fought and sang courageously for our rights and our freedom, will always be there.

On the 100th anniversary of Joe Hill’s execution 19 November, 2015 author Gail Schickele attended a performance of Joe Hill’s Last Will at the Subversive Theatre in Buffalo, NY where a young woman from the IWW provided Joe Hill-style Little Song Books and reminded us that the Wobblies are still going strong.